Kuwait's Statement delivered by H.E. Ambassador Mansour Ayyad Al Otaibi, Permanent Representative of the State of Kuwait to the United Nations, on behalf of the Member States of the Organization of Islamic Cooperation (OIC) – in the State of Kuwait’s capacity as Chair of the OIC –at the Security Council Open Debate on “Threats to International Peace and Security Caused by Terrorist Acts: Countering the Narratives and Ideologies of Terrorism” - 11 May 2016 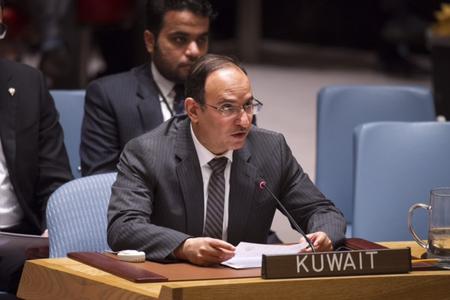 I have the honor to deliver this statement on behalf of the Organization of Islamic Cooperation, in my capacity as the chair of the OIC Group. At the outset, allow me to express to the delegation of the Arab Republic of Egypt, a fellow OIC Member State, both congratulations for presiding over the Security Council this month, and gratitude for holding an open debate on such a timely and important topic as “countering the narratives and ideologies of terrorism”.

The rise and spread of violent extremism across the world in general and Daesh’s terrorism in particular, and its increasing ability to reach out to the masses through media make it imperative to effectively counter their narratives and ideologies of terrorism.

Terrorism and violent extremism remain two of the most serious threats to every society, as well as to the international peace and security as a whole. Regardless of its ethno-religious identity, geographical location, socio-economic conditions, or political stance at the world stage, every nation is more or less susceptible to the growing threat of terrorism. Therefore, never in history, a comprehensive and concerted response to terrorism was needed as much as it is today.

The OIC believes that the first step of such an effort should be to deprive terrorist groups of legitimacy in the eyes of their primary support base by repudiating the very arguments they use to justify their criminal acts.

In this regard, it would be appropriate and necessary to correct first and foremost the misnomer, which is oft repeated as it is also wrongly mentioned in the concept note of this open debate. There is no such thing as a “religiously inspired terrorist group” as no religion either condones or inspires terrorism. Yet, there are terrorist groups that exploit religions.

As reflected in numerous Security Council and General Assembly resolutions, the OIC Member States believe that terrorism cannot be and should not be associated with any religion, ethnicity, race or nationality. Accordingly, no one should refer to Al Qaeda, Boko Haram, Daesh, Al Nusra Front, Al Shabab and other terrorist groups as “religiously inspired”.

On its part, committed to fighting terrorism and countering violent extremism, the OIC works toward delegitimizing terrorist ideologies, through developing counter narratives to such extremist ideologies and propaganda, by elevating credible and authentic religious voices that support tolerance and non-violence.

With respect to countering the appeal of Daesh specifically, the OIC Council of Foreign Ministers, during its 42nd Session held in Kuwait, adopted a resolution titled “Crimes of Daesh”, and called for effective implementation of Security Council resolutions 2170 (2014) and 2178 (2014) in order to prevent this terrorist group from recruiting foreign terrorist fighters. In this regard, the OIC believes that building the capacities and capabilities of States is critical for effective implementation of Security Council resolutions. Furthermore, the resolution also called for imposition of stringent measures against social media sites that are used by Daesh in order to propagate its heinous ideology and recruit sympathizers.

The OIC is extremely disturbed by the fact that terrorist groups, including Daesh, are increasingly exploiting cyber platforms to spread their hate messages and to disseminate their distorted interpretations of the Holy Quran. Such messages are aimed at exploiting socioeconomic and political frustrations of Muslims.

It is therefore of utmost importance that States, within the framework of international law and while respecting freedom of expression, identify and shut down such media platforms, whilst also engaging with communities to counter the narratives of terrorists and their propaganda. To that effect, the OIC has been working towards establishing its messaging center, based at the OIC Headquarters in Jeddah, as part of its counter terrorism and violent extremism efforts.

The OIC has consistently been at the forefront in the fight against terrorism and violent extremism. Cooperation with key international and regional partners in combating terrorism is among the key objectives of the OIC Charter. Adopting its Code of Conduct as well as Convention on Combating International Terrorism respectively in 1994 and 1999, the OIC was among the first to formulate a clear and principled position against terrorism.

Moreover, the OIC-2025: Program of Action, adopted by the 13th Session of the Islamic Summit Conference in Istanbul last month, is yet another important milestone. The Program of Action recognizes the need to improve utilization of Information and Communications Technologies for countering the exploitation of cyberspace for terrorist purposes, including radicalization and recruitment.

In addition, the OIC Summit has reaffirmed its support for the United Nations Global Counter-Terrorism Strategy and to the importance of addressing the causes of violent extremism in a comprehensive manner.

Extremism flourishes when human rights are violated. It is thus crucial that collateral damage and human catastrophe in counterterrorism operations is avoided, as otherwise they fuel extremism and radicalization.

The OIC is gravely concerned at the mounting trend of intolerance and discriminations against Muslims, and the consequent surge of Islamophobia, which is an affront to the human rights and dignity of Muslims.

The OIC believes that extremism grows within the context of an economic, social and political environment. It is essential that the contexts, which provide conditions conducive to the spread of terrorism and violent extremism, such as historical injustices, occupation, deprivation, exclusion, discrimination, and marginalization, be addressed with equal vigor.