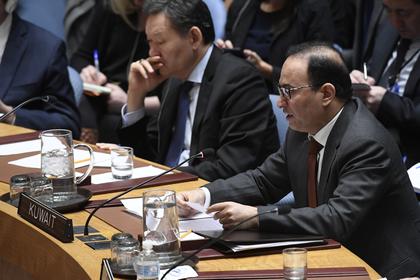 I deliver this speech today on behalf of the Kuwait and Sweden as co-penholders for the humanitarian aspect of the Council’s work on Syria. At the outset I would like to thank you, Mr. President, for convening this meeting at the request of my delegation, Kuwait, and Sweden, pursuant to Security Council resolution 2401. I also thank the Secretary-General of the United Nations, Mr. Antonio Guterres, for his presence today and his report on the implementation of resolution 2401.

Fifteen days have passed since the Security Council’s unanimous adoption of resolution 2401, which demands a cessation of hostilities without delay for at least 30 consecutive days throughout Syria to facilitate the delivery of humanitarian assistance to those in need, medical evacuations and to end the siege of residential areas. It is with great regret that we are still witnessing a clear absence of the implementation the resolution’s provisions when military operations and acts of violence across Syria still prevent humanitarian assistance and medical evacuations, particularly in Eastern Ghouta, and particularly by the Syrian authorities. This prevented United Nations teams and their humanitarian partners from safely providing humanitarian assistance to Eastern Ghouta, which is considered a primary area in need of assistance since its continued besiegement from 2013 and is home to about 400 thousand people.

In this regard, we would like to refer to a number of observations as follows:

First: We have followed with deep concern the denial of access for the United Nations and its humanitarian partners to enter the besieged areas, and to the various obstacles that they faced during their operations in some areas. We would like to refer to what happened in Douma, Eastern Ghouta on the 5th of March, which proved to be the deadliest day since the adoption of resolution 2401 where at least 100 people we killed. On that day the civilians’ hopes hinged on receiving life-saving humanitarian aid, and as we were looking forward to the first positive initiative to reach 90 thousand people in need of this assistance in Eastern Ghouta. However, what transpired was the decrease of the number of beneficiaries to to less than half  due to the Syrian authorities removing necessary medical supplies from the convoy’s load without giving any clear justifications, despite the fact that prior notification was given to the Syrian authorities, based on standard operating procedures, of the entirety of the humanitarian convoy’s content. It is also a matter of deep concern that convoys administered by the United Nations and its partners had to cease their operations before completely unloading their cargo due to continued hostilities in Douma. We also demand that the Syrian authorities give immediate permission for two convoys per week to Eastern Ghouta and one additional destination, as requested by the UN. We demand that all parties provide appropriate security guarantees for these convoys and that UN staff is allowed permission to accompany the convoys. In this regard, we reaffirm the need for all parties, in particular the Syrian authorities, to uphold their duty to protect all humanitarian workers, including United Nations agencies and their partners. We welcome that the United Nations and it’s partners were able to go back into Douma on 9 March to deliver the remaining food assistance, this was the second time for such convoys to enter Douma. There is a need to build on this to intensify the number of weekly convoys to the eastern Ghouta in a sustainable manner.

Secondly: We reiterate the Council’s demand for immediate unconditional medical evacuations based on medical urgency and need, starting this week and demand the Syrian authorities to give permission and work with the UN and its implementing partners to this end.

Third: The continued fighting in the area, specifically the incessant air strikes, invites us to, again, call upon all parties and the Syrian authorities specifically to comply with the provisions of the resolution as well as international law in order to facilitate humanitarian assistance to reach those in need. We believe that a daily five-hour truce in Eastern Ghouta does not support the implementation of resolution 2401.

Fourthly: The United Nations has confirmed that the number of combatants that pertain to terrorist groups designated by the Security Council in Eastern Ghouta does not exceed 350.We cannot accept continued military operations under the pretext of combating terrorism, when they effectively prevent the delivery of humanitarian assistance, contrary to the requirements of the resolution.

Resolution 2401, which was adopted unanimously, took effect immediately and is applicable to all parties throughout Syria. In this regard, we have taken note of the willingness of certain opposition groups in Eastern Ghouta to abide by the provisions of the resolution and to expel terrorist groups designated by the Security Council. We express our support for the efforts of the Special Envoy of the Secretary-General, Staffan de Mistura, to operationalize this without delay.

Fifthly: Listening to the Secretary-General’s briefing today on the status of implementation of resolution 2401 is one of the monitoring tools included in the resolution, but the main mechanisms remain in the existing cessation of hostilities agreements between the parties to the conflict, most notably the Astana Accord with Russia, Turkey and Iran as its guarantors, and the agreement supervised by the United States and the Russian Federation that emanated from the International Support Group for Syria (ISSG). The resolution stressed the need to activate these arrangements in order to reach a 30-day cease-fire aimed to allow sustainable access of humanitarian assistance to all regions in Syria. We reiterate our call upon those party to those aforementioned arrangements to redouble their efforts in order to implement the provisions of resolution 2401.

The unanimous position that the Security Council sent to the Syrian people and to the world by adopting resolution 2401 on 24 February 2018 must be built on in a speedy and effective manner, especially as the resolution is primarily of a humanitarian nature, and there rests a collective responsibility on us as members of the Security Council, and specifically as influential parties, to maintain our credibility before the world, and work to implement the provisions of resolution 2401. We also would like to stress that the provisions of the resolution are valid even after 30 days from the date of its adoption.

In this regard, we affirm our full commitment to continue to closely follow the status of implementation of the resolution in the monthly reports to the Council and we will spare no efforts to make progress on implementation. This month marks the beginning of the eighth year of the conflict in Syria, and sadly, after the start of eight years in this conflict, there is still a need for violence to cease, sustained humanitarian access through weekly cross-line convoys, medical evacuations, the protection of civilians and hospitals and the lifting of sieges. We cannot let the Syrian people down, we must continue to strive to implement these joint demands that we have set out.

Finally, we recall that the absence of any political settlement of the conflict in Syria based on Security Council resolution 2254 will lead to further deterioration of the humanitarian situation.