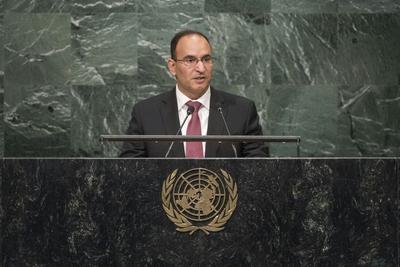 I have the honor and privilege today to address the General Assembly on behalf of the Asia-Pacific Group on the occasion of the adoption of the Security Council recommendation to appoint Mr. Antonio Guterres as the ninth Secretary-General of the United Nations for five years beginning the 1st of January 2017.

I would like to begin by taking this opportunity to thank our current United Nations Secretary-General Mr. Ban Ki-moon, who over the last 10 years has served the United Nations with dignity and humility. We are proud that Mr. Ban is from our regional group. He has inspired a global development for the future through the advancement in areas of women empowerment, gender equality, human rights and climate change. His tireless efforts on climate change resulted in the Paris Agreement, which will enter into force on the 4th of November of this year. Highly commendable was his drive to ensure that the work of the Millennium Development Goals would not be lost.  He pushed the agenda forward in assurance that no one is left behind, by encouraging Member States to adopt the Sustainable Development Goals to help protect the planet for future generations.

We would like to thank him for his many years of service to this organization, and we wish him well in all of his future endeavors. We reconfirm our commitment and support for him as he continues to serve out his remaining 78 days in office.

In this occasion, we would also like to take this opportunity to thank Madame Ban Soon-taek who has steadfastly stood by her husband during his 10 years as Secretary-General, and has taken an active role by traveling around the world with him to advocate the ideals of the United Nations.  She has helped organize and actively participated in numerous events to fund humanitarian activities, such as the United Nations International Bazaar.  She also worked to advance the rights of children, women and senior citizens by bringing attention to issues such as autism and violence against women, and for that, we truly thank her.

I am pleased and honored, on behalf of the Asia Pacific Group, to extend our sincere congratulations to Mr. Antonio Guterres, on his election as Secretary-General of the United Nations.

Mr. Guterres’ election to Secretary-General signals an era of change at the United Nations.  As a momentous selection procedure was initiated this year, which involved public hearings and informal dialogues, a Global Town Hall meeting and meetings with all of the United Nations regional groups, never has the election process been more open and transparent. Over six straw polls in the Security Council, Mr. Guterres was a clear favorite for the position. Moreover, Mr. Guterres’ demonstration of his extensive knowledge and expertise, evidently reflected in the interactive dialogue held at the General Assembly, enabled him to gain unanimous support from its members. Mr. Guterres has presented a clear vision for the role of the United Nations, a vision that provides all Member States with renewed hopes for the future.

He brings to the position a wealth of knowledge, professional skills, vision, experience and wisdom as a veteran politician and leader, bringing forth leadership abilities that will serve him well for the role of Secretary-General of the United Nations.

The Asia-Pacific Group welcomes the Secretary-General-designate Mr. Antonio Guterres, and wish him success in fulfilling this central role in an exceedingly critical time in the history of the United Nations. Mr. Guterres’ undeniable commitment is a stronghold to the platform and priorities he envisions to establish. The Member States of the Asia-Pacific Group pledge its firm support to him in encountering new and emerging challenges that lie ahead. This unified support is an embodiment on the confidence knowing the Secretary-General-designate is well-suited to head our organization.

We all aspire to end the prolonged conflict transpiring in certain parts of our world that constitute threats to international peace and security. We stand with the Secretary-General-designate in mediating these grave disputes. We believe that with his leadership, our collective efforts as well as encompassing the principles and purposes of the United Nations Charter as an integral tool, a peaceful solution and reconciliation may be attained.

We remain in confidence, that in light of promoting development and growth, the Secretary-General-designate would persevere into achieving the sustainable development goals, with high hopes that it would ultimately come into fruition.

His statesmanship and years of diplomacy would foster in further strengthening the structure of the United Nations.  While reinforcing multilateralism, we trust that Mr. Guterres would engage towards the ongoing reform of the United Nations, as its revitalization would ensure its resilience to the various challenges faced.

Terrorism, violent extremism, xenophobia, racism, religious intolerance, and its ramifications has been a daunting concern worldwide and is one of the foremost issues that the Secretary-General-designate need to raise awareness in countering the threats it imposes through international cooperation. As he assumes the position of Secretary-General, I wish to quote Sir Isaac Newton, one of the most influential people in history, with the hopes it will serve him well in his effort to pacify these social tensions, and I quote:

“We build too many walls and not enough bridges”

We, the Member States of the Asia Pacific Group trust that he will confront relevant issues with resolute determination. Under his leadership, it is with hope that we, as nations united, will build the bridges needed to pave the way to a peaceful, prosperous and just world.


Permanent Mission of the State of Kuwait to the United Nations