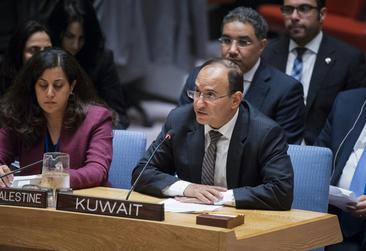 Kuwait's Statement delivered by H.E. Ambassador Mansour Ayyad Al-Otaibi, Permanent Representative of the State of Kuwait to the United Nations Security Council on behalf of the Member States of the Organization of Islamic Cooperation – in the State of Kuwait’s Capacity as Chair of the OIC on the "Middle East, Including the Question of Palestine" - 19 October 2016

I have the honor to deliver this statement on behalf of the Member States of the Organization of Islamic Cooperation. I would like also to express my sincere congratulations to you for assuming the Presidency of the Security Council for the month of October, wishing you all success, and to express my thanks to you for convening this open debate on the situation in the Middle East, including the Question of Palestine.

With the passage of almost fifty years of the Israeli occupation, the deadlocked political horizon and the impasse of the peace process continue to present a serious challenge to the international community due to the intransigence of Israel, the Occupying Power, and its disrespect of the will of the international community and international resolutions. At every juncture, Israel has rejected and obstructed international and regional peace efforts that have been based firmly in international law and UN resolutions.  Instead, it has sought to justify its illegal behavior with empty and distorted pretexts and has persisted with that illegal behavior on the ground, causing deep suffering to the Palestinian people under its occupation and further entrenching its illegal occupation.

Among the primary methods by which Israel has pursued its illegal agenda in the Occupied Palestinian Territory, including East Jerusalem, has been its building and expansion of colonial settlements and transfer of its own civilians into the occupied land in grave breach of international humanitarian law. On this occasion, it should be emphasized that Israel’s settlement practices, which involve the illegal confiscation of Palestinian properties, demolition of Palestinian homes, and forced eviction and displacement of Palestinian civilians, unmistakably underpin a policy of colonization and ethnic cleansing policy and constitute blatant violations of the inalienable and national rights of the Palestinian people.

Recent figures reveal that the socio-economic and humanitarian situation of the Palestinian population in the Gaza Strip in particular, where Israel has for nearly ten years imposed an illegal blockade, is the worst it has ever been since 1967 when the occupation began. At the same time, other unlawful Israeli practices, such as the ongoing arrest, detention and abuse in captivity of Palestinian civilians, including children, and military raids in which Palestinians are killed, injured or extra-judicially executed have become a pattern of daily life in Palestine, constituting a vicious and destructive cycle with both short and long-term consequences on the occupied population as well as on the prospects for peace and stability. It is clear and should be of extreme concern to the international community, including this Security Council, that Israel’s persistent pursuit of these aggressive policies not only undermines international efforts to ensure peace and security and the vision of the two-State solution based on the 1967 borders, but also constitute a flagrant breaches of international law and international humanitarian law, the Fourth Geneva Convention of 1949 and relevant resolutions of this august Council, for which the lack of accountability undermine international law, the credibility of the Security Council and the international system as a whole.

In this regard, the OIC underlines the urgency for the Security Council to assume its Charter-mandated role and take the necessary measures to end this deteriorating situation. A clear resolution should be adopted addressing Israel’s violations of the law, including its settlement policy. The demands for a halt to this illegal colonization campaign and for an end to Israel’s prolonged occupation must be clear and unequivocal. Such a resolution will constitute a meaningful contribution to and real support for the ongoing international efforts aimed at preserving and attaining the two-State solution on the basis of the relevant United Nations resolutions, the Madrid principle of land for peace and the Arab Peace Initiative, which sets forth a clear and just path for peace.

In this regard, the OIC reiterates its support for the French initiative to restore a political horizon under an international, multilateral patronage and within a specified time frame, with a view to ending the Israeli occupation and achieving a just, comprehensive, lasting and peaceful solution, which has been too long obstructed and delayed. Fifty years of occupation, oppression, humiliation and the worst kinds of human rights violations is enough, and it is morally, legally and politically unacceptable to allow this to continue.

The OIC warns against the repeated provocations and attacks on worshippers and Islamic and Christian holy sites, especially the Al-Aqsa Mosque and a number of churches in Jerusalem, by extremist Jewish groups. The dangerous consequences of such extremist actions would be far-reaching and grave and must be averted. Israel’s illegal practices and measures aimed at falsifying the history of the occupied city of Jerusalem, obliterating its Palestinian Arab identity, attempting to alter its indigenous demographic composition, the expansion of colonial settlements and expulsion of Palestinian citizens must end.

In parallel, we must caution about the grave impact of the actions of Israeli terrorist settler groups, including “Price Tag” and “Hilltop Youth” militias, which continue their incitement and terrorist attacks against Palestinian civilians, all with support and protection of the Israeli occupation forces.

These Israeli practices have created a tragic situation that calls for serious action by this Council to stop the ongoing Israeli violations, as they nurture extremism, violence and racism and further destabilize an already fragile situation. Such action also further fuel a religious conflict, which endangers regional and international peace and security.

It should be stressed that the right to security is not exclusive to Israel. Security is a right that should be provided to and enjoyed by all nations, especially victims of occupation. We call on this Council to assume its responsibility and provide the Palestinian people with international protection, in accordance with international humanitarian law. This Council, in line with its Charter duty to maintain international peace and security, must also act to preserve the prospects for peace and chart a way forward to finally justly resolve the question of Palestine after all of these decades and contribute to the establishment of lasting peace and security in the Middle East region. A just peace Mr. President, one where the Palestinian people recover their inalienable national rights, including their right to return, self-determination and the independence of the State of Palestine on the Palestinian territory occupied since 1967, with East Jerusalem as its capital, and to reach a just solution to the Palestine refugee issue, in consonance with the United Nations resolutions.