Your Excellencies, the Permanent Representatives of the Members States of the OIC,

Your Excellency the Permanent Observer of the OIC to the UN Ambassador Aghshin Mehdiyev,

At the outset, I would like to take this opportunity to extend our gratitude and appreciation to the people and government of the Republic of Uzbekistan for having successfully hosted the 43rd Council of Foreign Ministers and congratulate them on receiving the Chairmanship of our OIC Group. I have no doubt that their Chairmanship will be one that reinforces our Islamic solidarity.

I am truly honored and humbled at the same time, to have had the opportunity to chair the OIC Group in New York, a group consisting of 57 member states making up almost a third of the membership of the United Nations. Allow me, Excellencies, to express my gratitude to you, the Permanent Representatives of the Member States of the OIC, for all the support extended to us during the Chairmanship of the State of Kuwait of the OIC Group in New York from June 2015 until today. I would also like to thank everyone at the OIC Permanent Observer Mission for all that they have done in assisting us to assume our responsibilities.

Please allow me to go over a few of our activities during the Chairmanship of the State of Kuwait of the OIC Group in New York. During these past 16 months in which we chaired the OIC, we did our utmost to address the issues that were of significant importance to our Group, most notably the Palestinian cause, which is and will remain the top priority of our Group. Over the course of these 16 months, the Permanent Mission of the State of Kuwait in its capacity as Chair of the OIC delivered 15 speeches on behalf of the Group at the United Nations. We addressed the Security Council a total of 11 times, the most senior level was at the ministerial level in which H.E. Sheikh Sabah Khaled Al-Hamad Al-Sabah, First Deputy Prime Minister and Minister of Foreign Affairs of the State of Kuwait, addressed the Security Council on behalf of the OIC on the 30th of September 2015. Of the 11 times we addressed the Security Council, six of those times were during the Open Debate discussions on the Middle East and the Question of Palestine. In the General Assembly, we delivered a total of four speeches on behalf of the OIC Group.

Furthermore, our Ambassadorial-level meetings were a venue to coordinate our positions as a group and a forum to engage in discussions on a diverse number of issues of importance and relevance to our Member States; from Palestine to the Rohingya to the Central African Republic. Our meetings were also very much sought after by countries and officials who requested to meet with the Permanent Representatives of the OIC Group and brief us on things that were of mutual importance. Briefers included Ministers, United Nations Secretary General candidates, Security Council candidates, and Special envoys to name but a few. In total, the State of Kuwait chaired 11 Ambassadorial-level meetings.

Our list of activities and efforts during our chairmanship is long, but I will conclude it by referring to the State of Kuwait’s chairmanship of three ministerial-level meeting of the OIC on the sidelines of the United Nations General Assembly. One was as an Extraordinary Ministerial Meeting on the Israeli attacks on the Al-Aqsa Mosque and two were the Annual Coordination Meetings. In both Annual Coordination Meetings, we were successful in issuing a Chair’s summary consisting of the main issues of relevance to the OIC on the agenda of the United Nations. This is a practice that we in the Permanent Mission of the State of Kuwait are very proud of and was widely welcomed by the Member States of the Group.  I hope that we have paved the way for future Annual Coordination Meetings to continue this practice of issuing a Chair’s summary.

Stemming from our strong belief of the need to reinforce our Islamic solidarity and unity, our aim throughout our Chairmanship was to ensure that the OIC Group stood united and coordinated in its actions and positions at the United Nations.

I thank you once again for your support throughout the Chairmanship of the State of Kuwait, and now I have the honor to call upon the next Chairman of our OIC Group, the Permanent Representative of the Republic of Uzbekistan Ambassador Muzaffarbek Madrakhimov, to the podium to formally hand over the Chairmanship of the OIC Group in New York from the State of Kuwait to the Republic of Uzbekistan. 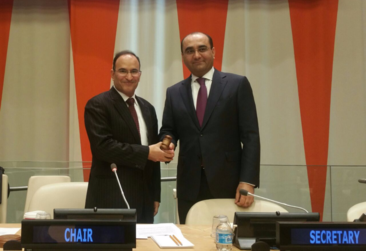