I have the honor to make this statement on behalf of the Member States of the Organization of Islamic Cooperation. At the outset, the Member States of the OIC welcome the restoration of diplomatic ties between the United States and Cuba, the reopening of embassies over a year ago, U.S. President Barack Obama’s visit to Cuba in March 2016, as well as the other significant steps undertaken between the governments of the United States and Cuba. The OIC emphasizes on the importance that those steps will have towards the normalization of bilateral ties between both nations and stresses that improving relations and moving forward positively would be mutually beneficial for both peoples.

Nevertheless, and in spite of the aforementioned positive steps, there remains the issue of the economic, commercial and financial embargo imposed by the United States against Cuba. Such unilateral action taken by the United States has not only done harm to the Cuban economy, but also to the well-being of the Cuban people and Cuban nationals living in other countries; thus creating unnecessary economic hardship for them. Furthermore, this decades long embargo has impeded socio-economic & development advances, and the continuation of the embargo obstructs Cuba’s efforts towards sustainable development. In addition, this unilateral blockade affects not only Cuba, but also extends to third countries, and entities and companies who face imposed fines for having commercial activity with Cuba.

The OIC believes such unilateral actions run counter to the principles and purposes of the United Nations Charter. The OIC reiterates its deep concern regarding the negative impact this unilateral blockade has on the Cuban people and sees that the continuation of such an embargo is unjustifiable.

The OIC supports the draft resolution introduced under this agenda item and calls upon the Member States of the United Nations to vote in favor of it.  The OIC believes that given the support behind resolution A/71/L.3 on the “Necessity of ending the economic, commercial and financial embargo imposed by the United States of America against Cuba,” this resolution truly reflects the international community’s collective view on this position.

Kuwait's Statement delivered by H.E. Ambassador Mansour Ayyad Al-Otaibi, Permanent Representative of the State of Kuwait to the United Nations General Assembly on behalf of the Member States of the Organization of Islamic Cooperation – in the State of Kuwait’s Capacity as Chair of the OIC on the "Necessity of ending the economic, commercial and financial embargo imposed by the United States of America against Cuba" - 26 October 2016 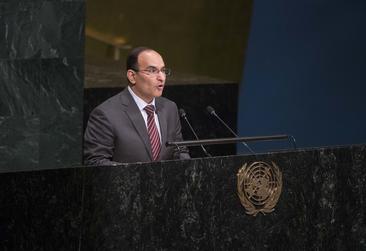