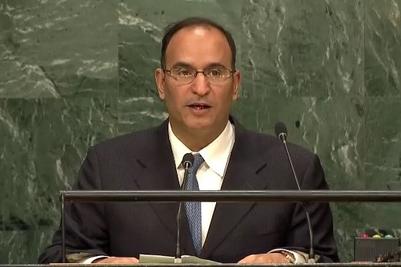 I have the honor to speak on behalf of the Asia Pacific Group to pay tribute to and honor the memory of His Majesty King Bhumibol Adulyadej of the Kingdom of Thailand at this gathering of the General Assembly.

On behalf of the Asia Pacific Group, we would like to express our sincerest and heartfelt condolences to the Government and people of the Kingdom of Thailand, who have been blessed with His Majesty’s leadership for over 70 years, their longest serving monarch, until his passing last 13th of October 2016.

His Majesty was cherished in his beloved Thailand, unifying the country throughout many difficult and trying times. Known as a king with compassion, and a peacemaker, he encouraged dialogue over conflicts, and maintained utmost respect throughout his reign.

He saw his country flourish into a regional leader, becoming one of the largest economies in Southeast Asia. His love for Thailand reflected in his commitment and advocacy towards economic, social and sustainable development for his country and his people.

His tireless works and contributions presented him the recognition by UNDP with their first Human Development Lifetime Achievement Award.

A great statesman has passed from us all, a monarch of unwavering integrity, abiding humility and steadfast service to his people. His Majesty was truly revered by all.

Thailands’ loss is a loss to the region, and to the world.

Once again, on behalf of the Asia-Pacific Group, we offer our sincerest sympathies to the Royal family, the Government and the people of Thailand, as they mourn for the loss of their extraordinary leader.

May his soul rest in eternal peace.

Kuwait's Statement delivered by H.E. Ambassador Mansour Al-Otaibi, the Permanent Representative of the State of Kuwait to the United Nations, on behalf of the Asia-Pacific Group of the United Nations at the General Assembly meeting on the "Tribute to the memory of His Majesty King Bhumibol Adulyadej, late King of Thailand" - 28 October 2016