Kuwait's Statement delivered by H.E. Sheikh Sabah Khaled Al-Hamad Al-Sabah, First Deputy Prime Minister and Minister of Foreign Affairs, on behalf of the Member States of the Organization Islamic Cooperation to the United Nations Security Council during the Open Debate on “Maintenance of International Peace and Security: Settlement of Conflicts in the Middle East and North Africa and Countering the Terrorist Threat in the Region” - 30 September 2015 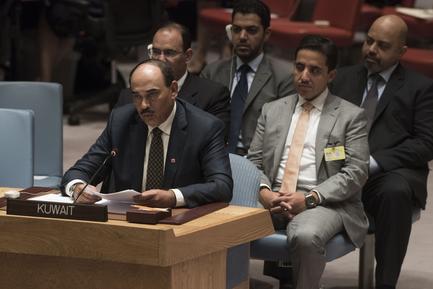 I am honored to deliver this statement on behalf of the Organization of Islamic Cooperation, in the State of Kuwait’s capacity, as chair of the current session of the Ministerial Council of the Organization. At the outset, it pleases me to extend my felicitations to Your Excellency on your successful and distinguished Presidency of the Security Council during this month, and on the concept paper prepared on the subject of this important session. We also would like to thank the delegation of Nigeria, a member state in the OIC, for presiding over the Council and the successful conduct of its work during the past month.

The settlement of conflicts in the Middle East and North Africa, as well as addressing the threat of terrorism in the region, is the prime concern of the OIC and its members. These issues top the list of priorities in the meetings of the Organization, which held numerous such meetings to discuss them, and have adopted many resolutions and initiatives to deal with them in regular and extraordinary sessions. The Organization exerts efforts and endeavors to support those of the United Nations and its various bodies to find solutions to the conflicts that have spread across the region and threaten international peace and security.

The circumstances that the region is witnessing are exceptional and difficult. There are enormous unprecedented security and political risks and challenges. The violence and turmoil that erupted in more than one country during the past few years are still ongoing unabated, and have caused utter chaos and instability, producing dangerous fallouts  and consequences that everyone is suffering from. Due to the instability and the continued circle of violence and fighting, many countries in the region have witnessed a remarkable decrease in various levels of economic and social growth, thus exacerbating the plight of the peoples of the affected countries. Currently there are millions of people who have become displaced, refugees and immigrants. For the first time, the international community is facing a humanitarian crises of such magnitude, wherein the number of people in the world in need of humanitarian assistance exceeds 60 million, the majority of them are from the Middle East and North Africa.

These tragic circumstances witnessed by the region have provided fertile ground for terrorist and extremist groups who exploit these circumstances to disseminate their aberrant and destructive thoughts, and have used parts  of the areas under their control and influence as a launching pad to commit the most horrible of  crimes, such as killing, displacing and terrorizing the innocent and committing serious violations of the international humanitarian law and human rights law.

Some terrorist groups justify their heinous and extremist acts as being inspired by the teachings of the true Islamic Religion, while they are far away from the principals and the basic concepts of the tolerant Islamic Shariaa and is considered against all morals and principles and pillars of our Islamic teachings. The Islamic religion is a religion of love and peace that calls for tolerance, solidarity and moderation, and rejects fanaticism and extremism. Therefore, all the Islamic states condemn terrorism in all its forms and manifestations wherever they are committed, regardless of what its motives and justifications may be. The Organization also rejects linking the crimes committed by these groups with the Islamic religion. Terrorism has no religion and is not tied to any country, race or culture, and combating it cannot be through confrontation or conflict with a great religion,  like the Islamic Religion, and feeding the feelings of hatred and incitement, and promoting erroneous conceptions about Islam, that contributed to the growth of the phenomenon of Islamophobia spread across the Western countries, from which, millions of members of the Islamic communities suffer.

In the framework of combating terrorism and extremism, the OIC   has built partnerships with international and regional organizations, as well as with relevant governmental centers for combating terrorism and extremism, it convened numerous meetings, and took initiatives to highlight the values of moderation , justice, equality and paying the needed attention to study the phenomenon of terrorism and extremism and has devised practical plans to deal with the various dimension and roots of this phenomenon. Also, an emergency meeting of the Executive Committee of the Organization was organized at the ministerial level on 15 February 2015, another special meeting was held in the State of Kuwait on 15 May 2015 to develop an active strategy to counter terrorism, violent extremism and Islamophobia.

The failure of the international community, represented by the Security Council, to resolve conflicts and grave political and security crises in the region, has contributed to the exacerbation of suffering, and further deterioration of the economic and social situation. As time passes, these crises became more intertwined, difficult and complicated, thus raising the costs incurred by the international community to resolve these crises and to limit the consequences and negative impact of these conflicts on international peace and security.

Perhaps, the most outstanding example of that failure is the Palestinian Question, the core of the Arab-Israeli conflict, which has remained without solution for many decades. The stalemate in the peace process, and the persistence of the occupying power, in its practices and settlement policies, its siege of the Gaza Strip, and its continued aggression on the Palestinian people and their property, in gross violation of international law and the resolutions of the United Nations, without any accountability or condemnation of such acts, has lead to the creation of a state of despair and hopelessness in international justice. It also undermined the credibility of the international community in standing by the Palestinian people, to obtain their legitimate rights. The latest aggression on the sanctity of Al-Aqsa Mosque, without any regard, to the feelings of the Islamic World, is merely one link of a chain of oppressive and systematic measures to judaize the city of Jerusalem and alter its demographic nature.

In this context, we call upon the Security Council to assume its responsibilities, as stipulated by the Charter of the United Nations, and work on implementing its resolutions in support of the rights of the Palestinian people, including their right to self-determination, the establishment of their independent state on their territory, with East Jerusalem as its capital, as well as full Israeli withdrawal from Palestinian and Arab territories occupied in 1967, including the Syrian Arab Golan, and the occupied Lebanese territories, and finding an equitable and just solution for the question of the Palestinian refugees, according to the resolutions of international legitimacy.