I have the honor to deliver this statement on behalf of the Organization of Islamic Cooperation. I would like to express my sincere congratulations to you on assuming the Presidency of the Security Council for the month of April. Please allow me to also express appreciation to you for convening this timely debate to address the situation in the Middle East, including the Question of Palestine, and to the Secretary-General for his important briefing on the current situation.

We meet again while the Occupied Palestinian Territory, particularly the Occupied City of Jerusalem, is enduring an unprecedented escalation of Israeli military aggression and terrorist attacks by Israeli settlers against the defenseless Palestinian people and their holy places without political, legal or moral deterrent. The Security Council meets at a time when Israel continues its gross, systematic crimes and breaches of international law, many tantamount to war crimes. Israel’s arrogance and disrespect to agreements with the Palestinian side, as well as the total impunity it enjoys for its violations and crimes, have brought the situation to a dangerous juncture. Yet, this Council regrettably remains silent, disregarding its duty for the maintenance of international peace and security and its commitment to protect civilians in armed conflict.

Since the last debate in January, Israel, the occupying Power, has continued killing and injuring Palestinian civilians, especially youth. Since the current wave of unrest began in October 2015, Israel’s “shoot to kill” policy has claimed the lives of more than 204 Palestinian civilians, 48 of whom were children. Likewise, Israel’s military aggression and settlers’ terrorism have left 17,000 injured Palestinians and has continued detaining, imprisoning, abusing and torturing thousands of Palestinians in its detention centers; destroying homes and infrastructure; and forcibly displacing Palestinians. In addition, Israel has all other forms of continued collective punishment of Palestinian civilians, the most egregious of which is its inhumane, illegal blockade on the Gaza Strip, amounting to systematic human rights violations and grave breaches of international humanitarian law.

At the same time, Israel, the occupying power, has persisted with its unlawful colonization of the Palestinian land, including through construction and expansion of settlements and the wall, especially in and around Occupied East Jerusalem. All of these violations blatantly aim at illegally, forcibly and deliberately altering the character, status and demography of the Occupied Palestinian Territory, and destroying the viability of the two-State solution based on the pre-1967 borders.

In this regard, the OIC reiterates that all such acts by Israel, including in particular against the Christian and Islamic holy sites in Occupied East Jerusalem, constitute a flagrant violation of the international law and resolutions of international legitimacy. They fuel rising extremism, violence and racism, and fuel a religious conflict, all of which demand the urgent attention and action of the Security Council.

It is incomprehensible that Israel continues perpetrating violations and crimes without response or punishment. We once again call on this Council to assume its responsibility for providing the Palestinian people with international protection. This Council and the High Contracting Parties to the 4th Geneva Convention have clear responsibilities in ensuring the protection and security of the Palestinian people. It must be stressed that the right to security is not exclusive to Israel; security is a right that should be provided to and enjoyed by all nations, and the victims of this nearly five-decade long illegal, foreign occupation should not be the exception.

At the same time, we should stress that an exit from the current crisis and revival of peace prospects will not be possible without compelling Israel, the occupying Power, to end its illegal construction and expansion of its colonial settlements and the wall in Occupied Palestine, including East Jerusalem. This is an urgent priority in line with the Security Council’s own resolutions and imperative for saving the two-State solution from demise.

I should note that the OIC, in its Extraordinary Summit which was held in Jakarta last month, called on this Council to uphold its Charter duties, as well as its legal and moral obligations to ensure accountability for the illegal actions perpetrated by the occupying Power, and to act to protect  the  Palestinian  civilian  population  and  end  the  pervasive, systematic  and  gross  violations  of their  human  rights. The OIC reiterates its call for a resolution that sets a specific timetable and practical steps to end Israel’s occupation in all manifestations, including the illegal settlement regime, on the basis of relevant Security Council resolutions, the Madrid principles and the Arab Peace Initiative.

In conclusion, I avail myself of this opportunity to reaffirm once more the OIC’s support for and solidarity with the Palestinian people in their endeavors to regain their inalienable rights, including their right to self-determination and independence in their State on the Palestinian territory occupied since 1967, with East Jerusalem as its capital, and achieving a just solution to the question of Palestine refugees, in accordance with relevant UN resolutions, a solution that is long overdue and that remains a legal and moral responsibility for this Council to fulfill. 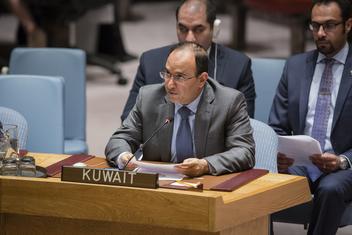 Kuwait's Statement delivered by H.E. Ambassador Mansour Ayyad Al-Otaibi, Permanent Representative of the State of Kuwait to the United Nations on behalf of the Member States of the Organization of Islamic Cooperation – in the State of Kuwait’s Capacity as Chair of the OIC –at the United Nations Security Council Open Debate on “The Situation in the Middle East, including the Question of Palestine” - 18 April 2016